Fence, including Aluminum Fence, is important for keeping unwanted visitors away, but can sometimes become a bit perplexing. We took a deep dive into some of the key terms associated with fence in an effort to clear away some of the fog.

Fence, similar to railing, seems like a simple product that doesn’t require much thought. However, there is much more to an aluminum fence system (or any fence system) than meets the eye. Today we will focus on 12 terms that mostly apply to aluminum fence, but many of these terms can be applied to several types of fencing. Bear in mind, this is only scratching the surface! Someday we will take an even deeper dive into the various terminologies utilized in the fence industry. To learn more about other building products and terms, be sure to check out our looks at railing, columns, and the construction industry!

1. Fence: An upright barrier typically made from metal or wood that encloses an area. Commonly used around yards, swimming pools, stadiums, parking lots, and other locations where keeping out unwanted guests is the goal.

2. Picket Fence: A fence with vertical components running periodically throughout. Typically spaced closely together enough to prevent passage by people or animals.

3. Fence Panel: An assembled fence section usually 4-6 feet long and as tall as the project requires. Some manufacturers will pre-assemble panels for ease of use on the jobsite.

4. Knocked Down Fence/Fence Kits: A kit containing all of the components to build a fence panel that will need to be fully assembled on the job site.

Superior fence is almost always shipped in pre-assembled fence panels in an effort to save contractors and installers time on the job site. To learn more, click here.

5. Top Rail: The highest horizontal component of a fence panel. Depending upon design, a top rail may be the highest overall portion of a fence panel, or it could have pickets running vertically through it (see photo below).

6. Bottom Rail: The horizontal component closest to the ground. In general, bottom rail is more critical for functionality as opposed to aesthetics. In picket fence applications, pickets will go thru the bottom rail toward the ground.

7. Mid Rail: A horizontal component or components between the top and bottom rail that can be utilized either to meet aesthetic preferences or to solidify pickets in excessively tall fence panels. Mid-rail can also be utilized to help secure decorative pieces if this design style is preferred.

8. Post: A vertical portion of a fence run that secures multiple fence panels together either via machined pocket posts on level applications (for Superior Aluminum fence), straight brackets, or swivel brackets for uneven terrain or turns.

9. Picket: Sometimes referred to as a baluster or spindle, pickets fill the space between the bottom rail, mid rail (if applicable) and top rail. Each fence panel will contain numerous pickets. Pickets can be in numerous shapes and styles, depending upon the needs of the project.

9A. Spear Picket: A picket that runs thru the top rail and is smashed at the top end to create a “spear” effect. 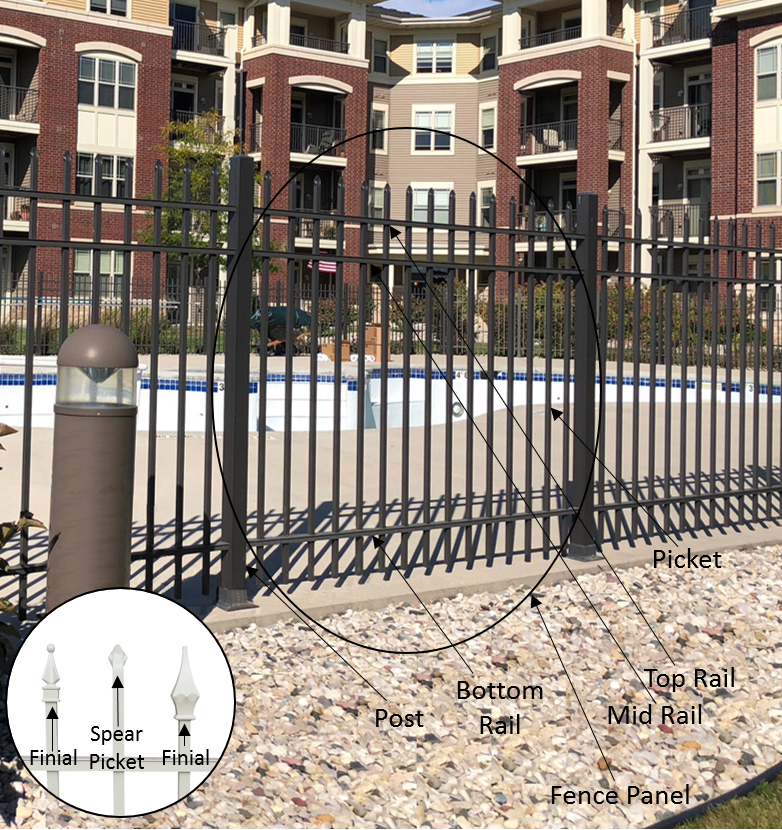 10. Gate: A specialized portion (or portions) in a large run of fence that is capable of moving to an open or closed position to allow entry to, and exit from, a fenced-in area. All Superior gates are built fully custom to the exact size requirements of your project.

11. Latch: A piece of hardware secured to a gate in order to fasten and hold a gate closed. Most gates feature one of two varieties of latch.

11A. Lokk Latch: A latch that secures shut and can be opened with a key.

11B. Magna Latch: A latch that can be opened via a magnetic upward pull. Can also be locked if desired.

12. Hinge: A joint attached to a gate that allows said gate to freely swing to open and close. Can be installed to be self-closing or to require a manual close. Superior Aluminum produces fence panels in pre-assembled sections specific to the needs of the project itself. Most manufacturers send along boxes and boxes of parts and lineals which require assembly on the job site, wasting precious time on the job site. Pre-assembled panels can cut the time invested in a given project at least in half, and usually more. If saving time and easing the pain and frustration of long days putting fence together outside in the elements interests you, give us a call at 937-526-4065 or contact us here! You can also learn more about Superior Aluminum fence here.