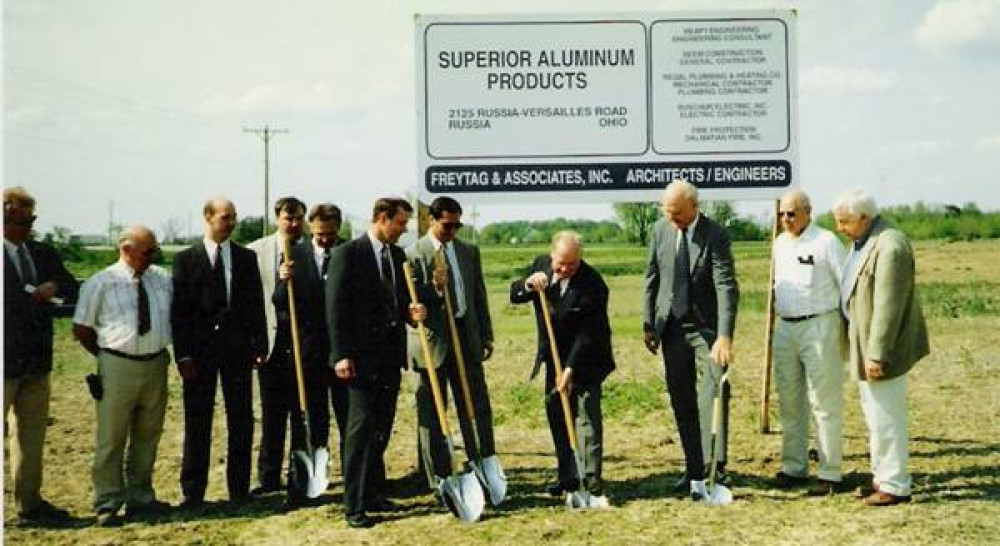 Superior Aluminum Products was incorporated on July 11th, 1956 in Youngstown, Ohio, by original partners Lou Burt and Lou Hermann.  The company and its 5 employees began manufacturing aluminum storm windows and screens, with original distribution primarily in the Midwestern states. Intense competition in the aluminum window market caused the duo to begin manufacturing aluminum railings in 1960.

This was a fairly new field of aluminum products, as wrought iron and wood had been the popular railing choice for many years.  The Series 600 Aluminum Residential Railing (6E) line, developed for single family dwelling use, such as porches and stairways, was sold mainly to home improvement dealers and quickly became the flagship product of the period.  As sales of the railing grew, Superior Aluminum gradually shifted the focus of the business entirely out of the window market.

In December of 1985, as a result of the company’s continued growth, the move into a bigger manufacturing facility was made.  The 56,000 square foot facility was formerly occupied by sister company Francis Manufacturing. Sales and staff continued to grow and in April 1996 Superior Aluminum broke ground on a brand new facility at 555 East Main Street.  With over 100,000 square feet of manufacturing capabilities, it is where the company still operates today.

In November of 2016, Superior Aluminum honored the 50th anniversary of the move to Russia with a ceremony honoring Ed Borchers and the late Tom Francis for their courage in purchasing and moving the company. At the conclusion of the ceremony, the lobby of the Superior office was dedicated as the Tom Francis and Ed Borchers lobby.

Superior Aluminum Products is proud of the history we've created.  We are especially thankful to all of our customers, suppliers, and employees who have contributed to our success for more than 60 years.

Who We Are Company History Product Timeline Testimonials Giving Back

"I recently installed four of your 10" Aluminum Square Panel Columns on my front porch and they are absolutely beautiful! Because of the precise extrusions, you can’t even tell where the joint seams are if you are not previously aware. I replaced some 60 year tapered wood columns with the new columns to great results. Thanks to you for a wonderful product. Also thank you to Horn Home Improvement of Harrodsburg, KY for being fantastic to do business with and leading me to the perfect product for my home."
-Richard - Frankfort, KY